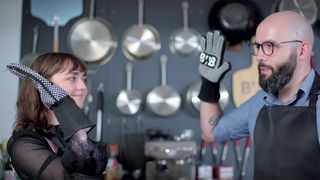 Binging with Babish is back with a new episode, this time welcoming a special guest into the kitchen. Since the task at hand is making a culinary treat from Game of Thrones, Babish brought GoT actress and former Highsnobiety cover star Maisie Williams to lend a hand.

We then find Maisie and Babish going head-to-head to see who can make the best direwolf bread. Direwolf bread first appeared in the fourth season of Game of Thrones when Hot Pie gave Brienne of Tarth a loaf of bread in the shape of a direwolf, made for Arya Stark (played by Williams).

To see whose wolf-shaped treat turned out best, press play above.

In other news, a rumored ‘Game of Thrones’ x adidas Ultra Boost has surfaced online.

Binging With Babish Shows How to Make the Ribwich From ‘The Simpsons’
Food & DrinkssponsoredMarch 20, 2019