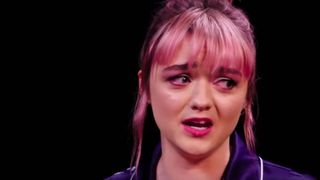 Maisie Williams hit Hot Ones today to answer the question, “What do we say to the last dab?” The animal rights activist ate vegan wings while tackling some of the myths surrounding Game of Thrones, including almost missing her audition for a field trip to see pigs, Queen Elizabeth refusing to sit on the Iron Throne, and the ubiquity of fake scripts on set.

She also talked about when Drake shouted her out at Billboard Music Awards, her friendship with Sophie Turner, and loads more about that little show she was on.

And if you’re wondering how she responded to the heat, well, she shivered. Watch the full episode above.

Maisie Williams Relives Her Troubled Past in Trailer for ‘X-Men’ Spin-Off ‘The New Mutants’
MoviessponsoredJanuary 6, 2020