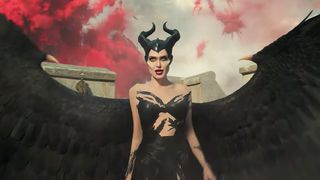 Angelina Jolie returns as the wrathful “evil fairy” in the first full-length trailer for Maleficent: Mistress of Evil. Jolie stars alongside Elle Fanning and Michelle Pfeiffer’s as Queen Ingrith, and commands the screen from the outset.

Upon learning of her ward’s engagement, she says, “Don’t ruin my morning,” before warning Princess Aurora, “love doesn’t always end well.” The sequel finds Maleficent and Aurora several years after the events of the first film. Now, Aurora is in line to become Queen of the Moors and Queen Ingrith is vying to become her new guardian. Watch the full trailer above.