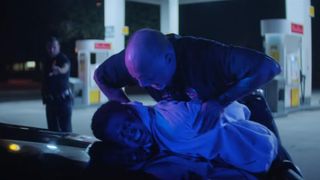 Last year, Nas made a grand return with the release of his eleventh studio album NASIR. Today, he shares a music video for his Kanye West-assisted single “Cops Shot The Kid.” As the title depicts, the politically charged song is about police brutality against the black community in America so the accompanying visual follows the same narrative with a pair of white police officers aggressively pursuing a black man. Given that Slick Rick’s 1988 hit “Children’s Story” was sampled on the track, it makes sense that he would make a cameo amidst all the action as well.

Back in November, Nas unveiled a short film titled NASIR. He was also recently announced as one of the performers for Governors Ball. View the full festival lineup here and watch the entire video above.

In other news, Aminé dropped flawless remixes Tierra Whack and Unknown Mortal Orchestra. Get all the details right here.