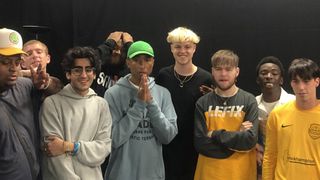 N.E.R.D. and BROCKHAMPTON performed at the Reading Festival in the U.K. this past weekend, with Pharrell inviting the group to join him and the entire N.E.R.D. crew on stage.

The California-based brand performed on the BBC Radio 1 Stage at Reading earlier, before watching N.E.R.D. perform, and during “Rock Star,” Pharrell Williams invited BROCKHAMPTON onto the set. The band did not perform with N.E.R.D. however, but jumped and danced around when the song “Lemon” played.

Afterward, Williams told the crowd to “make some noise for our younger brothers.” Watch some of the fan-shot footage of the event below, along with more of the performance above.

BROCKHAMPTON’s Kevin Abstract also tweeted about the moment, “bruh Pharrell just had the whole crowd chant brockhampton what the hell,” he wrote.

bruh Pharrell just had the crowd chant brockhampton what the hell

That tweet was soon followed by another. “OMG PHARRELL JUST CALLED BROCKHAMPTON TO THE STAGE,” it read.

What the actual fuck pic.twitter.com/JrNXGS18ig