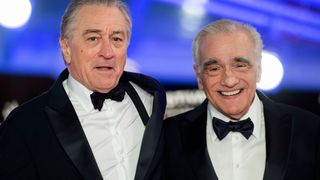 If at first you don’t succeed, you can dust yourself off and try again. After Alfonso Curan’s masterpiece ROMA shockingly didn’t take home the first Best Picture gold for a Netflix original at this years Oscars, the streaming service giant quickly initiated phase two. During the Academy Awards, Netflix surprised viewers with a tease of their next big film, Martin Scorsese’ The Irishman.

We don’t see much about the forthcoming crime drama in the minute-long trailer, but it does confirm a number of things including the impressive cast and release date. Scorsese is obviously helming the director crown, but the film will also be starring Al Pacino, Robert DeNiro, and Joe Pesci. If this doesn’t give you tingly Goodfellas or Casino sensations in your stomach, what will?

As previously reported, The Irishman is based on the Charles Brandt book, I Heard You Paint Houses, and follows Frank “The Irishman” Sheeran (De Niro), a mob hitman that was allegedly involved in the death of the Teamsters boss Jimmy Hoffa, portrayed by Pacino.

The film is due out later this fall. Are you excited for Scorsese’s next film?

Netflix’s ‘The Irishman’ Is Heading to Broadway for One Month
MoviessponsoredOctober 7, 2019
What To Read Next
Load More
Search Results
Load More