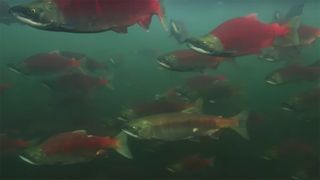 Patagonia premieres its new film, Artifishal, a picture focusing on the future of wild fish and the environment that supports them. More specifically, Artifishal delves into the salmon’s road to extinction, in addition to threats posed by fish hatcheries and fish farms.

With the Josh Murphy-directed film, Patagonia implores decision makers to refrain from spending money on failed plans, but instead invest in science-based solutions that are more likely to save endangered wild salmon and orcas. This includes putting a stop to hatcheries, reducing harvest, and removing dams.

All of us, however, can help by buying wild salmon from well-managed, hatchery-free fisheries, eating smaller fish, refraining from purchasing Atlantic salmon or steelhead, which are predominantly farmed in net-pens or harvested from endangered populations, and choosing not to consume larger fish at the top of the food chain.

After watching Patagonia’s Artifishal film above, you can sign the petition to protect wild fish here.

Patagonia’s New Initiative Will Help You Dunk on the Climate Change Deniers in Your Life
StylesponsoredNovember 26, 2019

Patagonia Is Closing All Its Stores Worldwide to Participate in Climate Strike
LifesponsoredSeptember 17, 2019

Get Prepped for FW19 With These Highlight Patagonia Pieces
SelectssponsoredSeptember 13, 2019