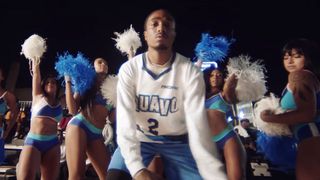 Fresh off the release of his debut solo album QUAVO HUNCHO, Migos frontman Quavo is back with the official video for “HOW BOUT THAT?,” taken off the aforementioned project. The Migos member previously dropped the visual for “B U B B L E G U M” in October.

Directed by Kid Studio and Quavo himself, the rapper channels his inner Michael Jordan in the visual, as Quavo is known to be a stud athlete in basketball, as well as in football. The clip starts off with Quavo’s basketball team in a locker room with low morale after a rough first half. Coach Quavo then takes cues from the classic Space Jam film by passing around a bottle of “Quavo’s Secret Stuff,” as he then suits up and helps lead his team to victory.

Enjoy the clip above, then after, see Migos show off their acting chops by script reading ‘Narcos: Mexico.’