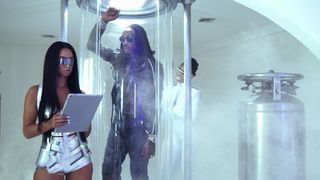 Leading up to the release of his solo album, Quavo has shared a sci-fi inspired visual for the single “B U B B L E G U M.” Designer, model and actress Draya Michele stars alongside the rapper in the bubblicious video which makes virtual reality look all the more appealing.

Quavo recently performed a handful of tracks off the album on The Tonight Show. Guest features include Cardi B, Kid Cudi, Drake, Travis Scott, 21 Savage, Saweetie, and more. According to the Migos member, Quavo Huncho will be premiered on DJ Khaled‘s Beats 1 show on October 11 at 9:00pm ET via Apple Music. The full project is slated to drop on October 12.

Q U A V O H U N C H O Y E S S I R R Debuts this Thursday at 6pm PT/9pm ET on @DJKhaled’s We The Best Radio on @applemusic’s @beats1official. The lil’ bro @asahdkhaled the plug convinced me to make it happen!!! ? #TheRant #QuavoHuncho

In other news, slowthai released a video for “Rainbow.” Peep all the details right here.

Quavo Flexes His Drip in New Video for “Virgil”
MusicsponsoredAugust 21, 2019