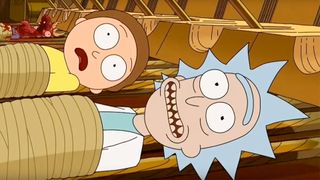 One eagle-eyed Redditor just found a reference to a bat-shaped comic book legend hiding in the Emmy-nominated Rick and Morty episode, “Pickle Rick.” While every deranged episode of Rick and Morty contains countless obscure references that offer clues as to where creators Justin Roiland and Dan Harmon find their inspiration, this one is perhaps more obvious than most (to animation fans at least) — yet most of us still missed it.

It takes place after the “Pickle Rick” credits roll. Rick and Morty find themselves strapped inside a huge piano at the mercy of villain Concerto, who taps the keys to send hammers raining down onto the heads of Ricks from alternate dimensions. As Redditor Capgunkid notes, the scene is a reference to an animated Batman episode, specifically the 1998 episode of The New Batman Adventures, “Legends of the Dark Knight.” In the scene, Batman and Robin are trapped in a similar situation at the hands of the Joker and must out-roll piano keys to avoid being smashed to death.

Check out the Rick and Morty scene up top before comparing it to Batman below.

Thanks to another Redditor‘s observations, it seems as though this animated Batman sequence is a reference, too. It harks back to an episode of Adam West’s live-action Batman titled “Dead Ringers.” Airing in 1966, here Batman is at the mercy of Liberace, who is trying to kill him with a hole-punching machine controlled by piano music. Watch below.

Do you have a favorite Rick and Morty easter egg? Let us know in the comments.