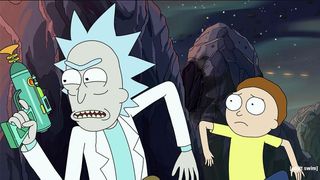 It’s a good day for Rick and Morty fans. Not only did Adult Swim release the show’s official premiere date, but it also blessed fans with a full trailer.

Premiering November 10 at 11:30 p.m. EST on Adult Swim, season 4 of Rick and Morty will only feature five episodes, as playfully pointed out by the trailer’s tagline “Half the Season you deserve, all the season we can handle.”

Though the season may be shorter than usual, the clip shows that it’s still jampacked with action, as well as the return of fan-favorite character Mr. Poopybutthole.

Season 4 arrives after a two-year hiatus, but thankfully, the show’s creators have announced that they’re already working on season 5.

While we count down the days until Season 4 drops on November 10, watch the full trailer above.