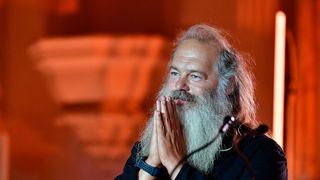 Earlier this year, Showtime announced it was producing a Rick Rubin documentary titled Shangri-La. Now, the official teaser trailer has dropped. Check it out above.

Opening with crashing waves harkening to the location of the producer’s famed Shangri-La studio in Malibu, California, the teaser unfolds with rapid-fire images of his locale with glipses of artists like Ezra Koenig of Vampire Weekend and Red Hot Chili Peppers bassist Flea.

The docuseries will showcase Rubin’s creative process, “giving viewers a taste of what it’s like to be produced by the music world’s most singular voice.” Morgan Neville, who also helmed Won’t You Be My Neighbor, is the project’s director.

Showtime will debut the four part Shangri-La docuseries on July 12.

This Is Why André 3000 Won’t Be Making New Music for a While
MusicsponsoredDecember 17, 2019