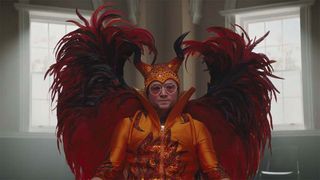 Late last year we got our first look at Taron Egerton as Elton John in the upcoming biopic, Rocketman. In continuing to cultivate a buzz surrounding the impending premiere, Paramount Pictures shares a new trailer for the anticipated film.

While the initial trailer teased Elton John’s pathway to stardom, the second clip provides more of the same, going into detail to document the musician’s journey from the Royal Academy of Music to international superstar. According to Paramount, Rocketman also explores John’s influential and enduring musical partnership with Bernie Taupin.

Jamie Bell, Richard Madden and Bryce Dallas Howard star alongside Taron Egerton in Rocketman, which is due in theaters May 31.

The only way to tell his story is to live his fantasy. ✨ @TaronEgerton is Elton John in #Rocketman, in theatres May 31st 🚀
Watch the new trailer now!pic.twitter.com/C6sIHO4aQK