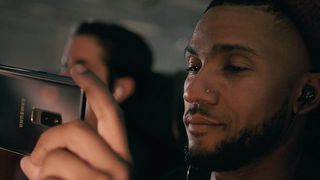 “When your lagging phone does you wrong, you gotta move on.” So goes the slogan in the latest Samsung Galaxy S9 ad, which spends most of its airtime slamming Apple products for their slow load time.

The ad is titled “Moving On,” and goes hand in hand with a recent review by analysts that hails Samsung’s Galaxy S9 and S9+ as the fastest cellphones in the world.

Poking fun at Apple’s “lagging” — their words, not ours — load time, the advert rips apart the iPhone 6, showing the ad’s protagonist stuck in various crappy situations that would have been helped had her phone responded more quickly. It also shows her being patronized by an Apple employee at the Genius Bar, although how on earth she got an appointment at such short notice is left unexplained. Hell, even her mom texts her with instructions to upgrade.

In a nutshell, her phone lets her down time and again, until she switches over to the Galaxy.

How do you think Apple should respond to this ad? Let us know in the comments.

In other news, get ready to find out exactly how much time you’re spending on Instagram.

Samsung Is Releasing a 5G Version of the Galaxy Z Flip Phone
DesignsponsoredJuly 24, 2020