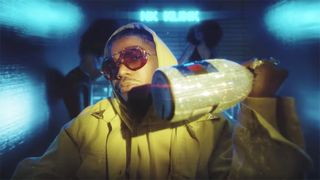 After recently wrapping up his sold-out North American tour — where he played 29 shows across the US and Canada — Smino is back revisiting his 2018 album, NOIR, sharing the official music video for project track, “Klink.”

We find Smino portraying a high-powered jewelry dealer in his “Klink” visual, as he can be seen peddling a selection of rare diamond-encrusted products ranging from a pair of Air Force 1s to a denim jacket and even an iced-out stroller.

?I GOT MY OWN REMY AT HOOOME…. OUT ERRWHERE NOW drop a ??‍♂️??‍♀️if you watching #KLINK “I wrote & co-directed dis hoe” (LINCOLN BIO)

Press play above to watch the Nicholas Woytuk and Smino-directed aesthetic.

Smino’s new video arrives as the St. Louis rapper is gearing up to perform at the MoMA PS1 and Lollapalooza this Summer.

For more from Smino, see underneath as he goes shopping for Needles & Kapital at Mannahatta NYC.