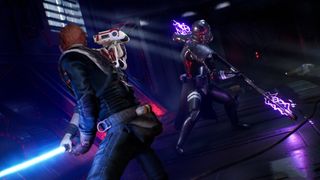 At E3 2019, EA Play delivered a 14-minute first-look at Star Wars Jedi: Fallen Order gameplay that left many underwhelmed. The vertical slice that was shown presented an extremely linear level design and storytelling that confused fans on what sort of game developer Respawn was making. In response to the backlash, the studio released an extended 26-minute version of the demo to give a broader look at the gameplay, open world mechanics, and features.

The extended demo was originally shown behind-closed-doors for media, but never released to the public. It left many confused since the longer version is way more impressive showcase of what the game has to offer.

Someone from Respawn told me about some of this stuff last week and I was baffled – the demo looked fun but I have no idea why EA would show linear, Nathan Drake-ish action-adventurey footage when it sounds like this game is so much more than that https://t.co/UY7YaX9N0X

“We spent months going back and forth discussing the best strategy to release this content, and ultimately decided for the first-look, it was critical to present a focused 15 minutes of raw, in-game footage highlighting lightsaber gameplay that speaks to the Jedi fantasy in an empowering way,” he states. “But it should not be mistaken that our combat is overpowered or easy. I promise there is considerable challenge and depth to be found within our combat system.”

He continues to address the game’s level design explaining that a non-linear approach is the focus here and is taking influence from classic games “like Metroid, Castlevania, and the Souls series.”

He unveils, “the game will feature several planets that the player can elect to travel to via starship. On these worlds unique abilities and upgrades can be found that open up new paths across other planets, making retraversal an essential part of the gameplay experience. This is a lot to describe in 15 minutes of gameplay. Getting hands on the full 25 minute experience is best to completely understand it.”

Take a look at the full 26 minute gameplay demo for Star Wars Jedi: Fallen Order above.

How to Watch the ‘Star Wars: The Rise Of Skywalker’ Event in ‘Fortnite’ Today
MoviessponsoredDecember 8, 2019