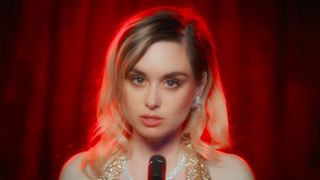 After years of waiting, Terror Jr‘s debut full-length album has finally arrived, and it’s even juicier than you could have imagined. Unfortunately, Terror Jr runs 15 tracks deep and includes the sensational song “Heaven Wasn’t Made For Me” that we previously premiered. Following the drop, the dark pop duo also unveiled a visual for their latest single “Terrified” which you can watch above.

“We were very naive going into making ‘Unfortunately’,” they said in a press release. “We definitely didn’t expect to take over a year to create it. Working with a gang of talented strangers sounds easier on paper, in reality it’s more error than trial… But hearing the final product, we’d do it all again, even if it took ten years. There are no soft moments on our album and that’s intentional… We don’t want to be background music… The point is to engage. We hope that people listen to these songs with questions and come out with answers…”

Even though Terror Jr claims that there are “no soft moments” on the album, we would argue that this song in particular has a tender approach about confronting insecurities of the heart head on. Scroll down to stream the full project in all its glory.