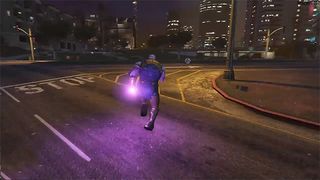 On his quest to conquer the Marvel Cinematic Universe and beyond, Thanos had already crossed over into Fortnite, becoming an unlockable character as part of the Infinity Gauntlet game mode. Now, the Avengers: Infinity War villain is playable as a mod on Grand Theft Auto V, thanks to modder JulioNIB.

In the video above, the fully playable character uses portals, power blasts, and the power of his six Infinity Stones to wreak havoc on the citizens of San Andreas and Los Santos.

Watch the rest of the gameplay footage below and look forward to being able to play as Thanos when the mod becomes available.

What do you think of this Avengers-inspired GTA mod? Let us know in the comments.

In other news, Real Madrid’s Sergio Ramos is the internet’s new favorite meme. Check out some of the best takes here.