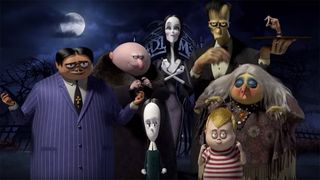 In the official trailer for the animated The Addams Family we find the clan adjusting to their new home in New Jersey. All the while, however, their nosy neighbor attempts to have them kicked out of town.

MGM’s The Addams Family remake is due out October 11 in plenty of time for Halloween.

The First Full-Length Trailer for ‘The Lion King’ Will Make You Ridiculously Nostalgic
MoviessponsoredFebruary 25, 2019