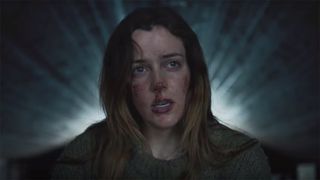 Riley Keough, the daughter of Lisa Marie Presley and Danny Keough, and the eldest grandchild of Elvis and Priscilla Presley, stars in Goodnight Mommy directors Veronika Franz and Severin Fiala’s English-language debut, The Lodge. Following a premiere and rave reviews at Sundance, the movie’s official trailer has made its way online.

Not as happy as the Met Ball but The Lodge is coming soon ?☠️?☠️

Keough stars as Grace, a young woman who will soon marry the father of Aidan and Mia, two kids who are unwaveringly devoted to their mother. When Grace takes a trip to a remote lodge with Aidan and Mia — in order to better acquaint themselves — the two children decide to dig up as much dirt as they can on their new stepmom. They quickly find out that Grace had a traumatic childhood of her own. All the while, an intense snowstorm rolls in, leaving the three trapped in the house.

Jaeden Lieberher, Lia McHugh, Alicia Silverstone, and Richard Armitage star alongside Riley Keough in The Lodge, which is already being pegged as one of the best horror films in years. You can look forward to the movie landing in theaters this fall.

Bong Joon-Ho’s ‘Parasite’ Looks to Be One of the Year’s Best Films
MoviessponsoredOctober 2, 2019
What To Read Next
Load More
Search Results
Load More