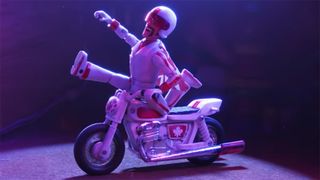 In continued promotion of the film, Pixar this week shares a new TV spot for the much-anticipated Toy Story 4. The brief clip gives us a look at Duke Caboom, voiced by none other than Keanu Reeves.

Reeves’ Duke Caboom is a daredevil stuntman from Canada, who just so happens to be not very good at stunts. In the spot we find Sheriff Woody and company analyzing Duke’s stunts, and let’s just say they’re not all that impressed.

A veteran in the film industry, Keanu Reeves doesn’t have an extensive resume when it comes to voice acting. In the past, he’s voiced animated characters for The Animatrix and the Bill & Ted’s Excellent Adventure animated series, just to name a few.

Woody is all set to for a road trip with old friends and new in Toy Story 4, which comes to theaters stateside June 21.