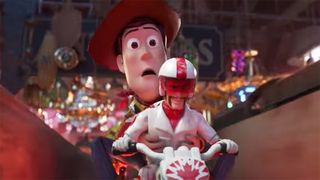 Our last look at Toy Story 4 introduced a new character in stuntman Duke Caboom, voiced by Keanu Reeves. Duke steals the show in the new trailer, as he and Woody team up for a heroic jump.

Directed by Josh Cooley, who is making his feature film directorial debut, Toy Story 4 finds Woody, Buzz Lightyear, and the gang on a mission to rescue Tony Hale’s Forky, a new character in the form of a spork that has been made into a toy. While searching for Forky, Woody stumbles upon an antiques store where he ultimately finds Bo Peep (Annie Potts) living among lost toys. This is where we are also introduced to Keanu Reeves’ Duke Caboom. Now Woody and company will find out just how big the world is as they embark on a road trip adventure to hopefully locate Forky.