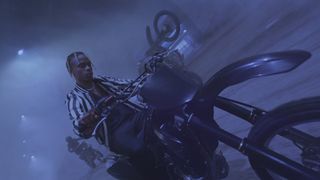 Following a fiery performance at the Super Bowl LIII halftime show this weekend, Travis Scott has dropped a new video for his latest single “CAN’T SAY.” The Don Toliver-assisted track is featured on the rapper’s record-breaking third album, ASTROWORLD.

Saint Laurent produced the visual which includes a flashy wardrobe that comes straight out of the Saint Laurent by Anthony Vaccarello collection. The Nathalie Canguilhe-directed video kicks off with a dystopian-like vibe with a biker gang led by Cactus Jack as they pop a few wheelies while riding throughout a city. The dreamy footage is also sequenced with CGI horses and religious iconography for a surreal experience that perfectly blends with the music’s overall creative production.

Enjoy the entire visual above and catch Scott on the second leg of his North American ASTROWORLD tour at the remaining dates: