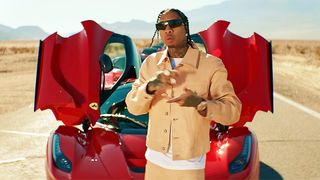 Tyga has just dropped the official video for his first track of 2019, “Floss in the Bank.” Watch it above.

The video sees Tyga hanging out in Egypt, chilling in secret pyramid parties, spitting bars in the desert, and driving a red Lamborghini into the mouth of a giant anthropomorphic sandstorm like we’re watching some sort of suped-up T-Raww vs. The Mummy situation. A situation that, for some reason unbeknownst to us, leads to Medusa dancing in space.

“Floss in the Bank” was directed by Arrad & Tyga.

In other news, Rihanna has filed a $75 million lawsuit against her dad for exploiting her name.

Welcome a Post-Sneaker World With Our Favorite Black Shoes
SelectssponsoredAugust 13, 2020