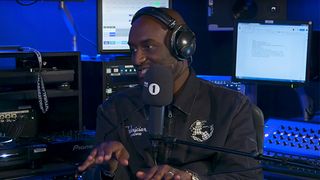 Virgil Abloh sat down with Benji B to discuss what he calls the “collage of cultures” that inspire and motivate his creative process. The DJ reminisced with longtime collaborator, Benji B about building a knowledge base of music growing up in Chicago. Watch the interivew above as he expands on his many inlufiences such as, listening to BBC Radio 1, the club scene in New York, and the subcultures that he has intersected throughout his career.

Abloh spoke on a number of significant touchstones within his practice, including working with Kanye West, growing up in Chicago, being influenced by skate culture, and the singularity of the UK Grime scene.

He also elaborated on his attitude towards creative expression, saying “When it comes to self-expression, especially in a creative atmosphere, those things that hold you back from sort of executing your dream — are myth.” According to the multi-disciplinary artist, there are no consequences. He recalled, “It took me that period to question my myself and ask, ‘Am I going to believe the myth that I can’t be a designer, on the highest level?’” Watch the interview above.

Kanye West, Virgil Abloh & Other Major Designers That Are Influenced by Bauhaus
DesignsponsoredSeptember 23, 2019