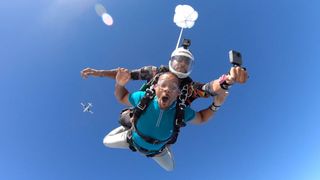 Now that Will Smith has achieved everything he’s dreamed of career-wise, it’s time for him to cross off some lingering life goals.

It’s no wonder he had to turn down the Suicide Squad sequel due to scheduling clashes. Smith has been circumnavigating the globe with his family, undertaking all manner of physical and psychological challenges for the show.

“Fear of the unknown” has apparently kept him from “that divine wisdom” and what better way to connect with the divine than through bungee jumping, Formula 1 racing, and swimming with sharks. You can enjoy the whole middle-aged escapade that is Will Smith’s Bucket List on Facebook Watch.

Along with his wife, Jada Pinkett-Smith, the star is joined on the show by sons Trey and Jaden Smith. Willow Smith is not involved because, according the show’s protagonist, “she told me it’s stupid.”

In future episodes you can expect to see the Bad Boys actor pursuing activities such as running a half-marathon in Cuba, and perhaps the most terrifying challenge of all – stand-up comedy.

While the premise is undeniably corny, there is something deeply satisfying about watching Will Smith confront his fears in what are probably very controlled conditions.

New episodes of Will Smith’s Bucket List will be available Wednesdays at 12pm ET on Facebook Watch.

Will Smith Returns to Rap for Joyner Lucas’ “Will” Remix
MusicsponsoredMay 15, 2020