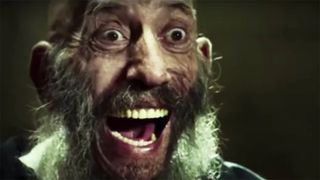 A long time coming, we finally get a first look at Rob Zombie‘s new film, 3 From Hell. The movie is the latest installment in Zombie’s House of 1000 Corpses series, serving as a followup to 2005’s The Devil’s Rejects.

For those unfamiliar with Zombie’s film catalog, protagonists Captain Spaulding (Sid Haig), Otis (Bill Moseley), and Baby (Sheri Moon Zombie) were all shot multiple times at the end of The Devil’s Rejects. Evidently they survived the gunfire, however, as the trio is back for more action in 3 From Hell.

In addition to Haig, Moseley, and Zombie, Danny Trejo, Richard Brake, Tom Papa, and Kevin Jackson also feature in the anticipated picture. Unfortunately, plot details have yet to surface, but expect to hear more leading up to the film’s release this fall.