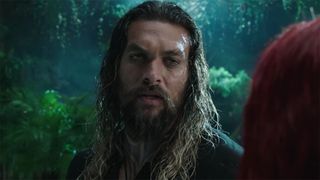 Ahead of the winter premiere, Warner Bros. gives us a new extended look at DC’s Aquaman. The lengthy trailer is jam-packed with over five minutes of footage from the film, as we see Jason Momoa’s Aquaman paired alongside Amber Heard’s Mera.

Take a deep dive into an extended look of #Aquaman now! See the full video at the link in bio. In theaters December 21.

Aquaman will ultimately tell the origin story of half-human, half-Atlantean Arthur Curry, aka Aquaman. During his epic journey, Arthur will not only learn more about who is, but he will also find out if he has what it takes to be a king.

Patrick Wilson also stars in the upcoming DC movie as Arthur’s brother and de facto King of Atlantis, Orm, while Temura Morrison and Nicole Kidman play his father and mother.

In other movie news, Clint Eastwood is an 80-year-old drug courier in his new crime-drama, ‘The Mule.’