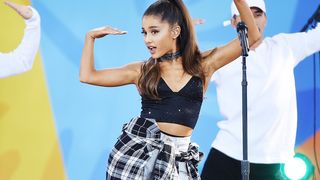 Last month, Ariana Grande and Pete Davidson took their relationship to the next level by adopting a baby pig. (A few days ago, Grande tweeted that she is a certified emotional support animal.) Naturally, the power couple named her Piggy Smallz, and Davidson even has a tattoo of the beloved pet on the side of his torso.

It was only a matter of time before Piggy Smallz was properly introduced to the world and today appears to be the day because Grande has put her front and center in the visual for her latest single “breathin.” Running around three minutes long, the grainy footage follows Piggy Smallz as she roams on top of a grey faux fur blanket. Cuteness overload doesn’t even begin to describe this wholesome content.

Before the video dropped, Grande took to Instagram to update fans on all of her upcoming plans. Apparently, she’s been in the process of trying to shoot a proper video for the Sweetener track, but hasn’t had enough time so perhaps something more official is on the way. In the meantime, feast your eyes on the adorable pig above.

god is a woman and breathin are both in the top twenty rn at radio ! thank u so so so much ! i cant wait for you to hear what else i’ve been working on. tryna announce american sweetener tour dates asap, tryna get u the docuseries asap and tryna shoot a breathin video bc i forgot to (hope there’s still time) i love u thank u ! oh & also i saw some of the BBC special thing we did in london for u and i think you’ll be really happy w that too i hope. word ok bye. sry if i fell behind on any of dis.

In other news, Anderson .Paak announced the release date for his ‘Oxnard’ album. Get all the details right here.

Ariana Grande Has a Message for Those Refusing to Self-Isolate
LifesponsoredMarch 16, 2020
Follow
Highsnobiety Music
What To Read Next
Load More
Search Results
Load More