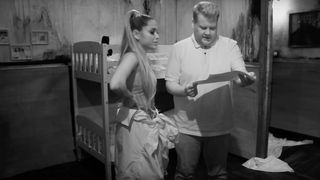 For an appropriately spooky episode of The Late Late Show, James Corden and Ariana Grande decided to scare themselves at an Escape Room — which turned out to be slightly more than they bargained for.

The duo had to explore a series of pitch black rooms, while actors in costumes set out to terrify them. Even Grande, who earlier boasted of going to haunted houses and escape rooms lost her cool.

“That’s not an escape room,” Grande declared when they finally escaped. “That’s one of the seven gates to hell.”

Watch the hilarious video above.

In other news, here’s what your favorite celebrities dressed up as for Halloween.