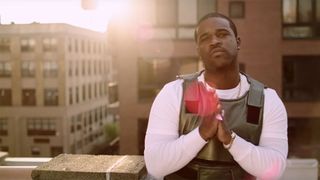 Last week, A$AP Ferg unveiled a brand new song called “Harlem Anthem”, as part of the Uncle Drew soundtrack. Now, he’s shared the official music video for the track, featuring local legends like Dapper Dan, which you can watch above.

The Harlem rapper was recruited for the soundtrack to the upcoming film Uncle Drew, and on his latest track, he samples Public Enemy’s “Welcome to the Terrordome”, and pays homage to legendary Uptown rappers Cam’Ron and Ma$e.

The soundtrack to Uncle Drew is also set to feature French Montana, Wiz Khalifa, A$AP Rocky, 2 Chainz and more, as you can see in the tracklist below. Uncle Drew is set to hit theaters June 29. Revisit “Cocky” by A$AP Rocky, Gucci Mane & 21 Savage ft. London On Da Track after the jump.

In other music news, check out everything that went down at Kanye West’s album listening party in Wyoming right here.