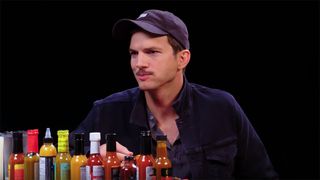 First We Feast continues season 10 of Hot Ones with this week’s guest, Ashton Kutcher. Admittedly fearful of the challenge, the actor and tech investor dishes on everything from partying with Diddy to chatting with Kobe Bryant courtside, all while attempting to down the spicy wings.

Kutcher begins the episode by dishing on the many manual labor jobs he had growing up, including having to cut bull testicles. From there, he dives into the influence of Punk’d and reality TV in general, going so far as to admit that he’s a huge fan of The Bachelor.

A Hollywood veteran with more than 20 years in TV and film, Ashton has no shortage of celebrity stories. He details the time he went running with Diddy, which ultimately led the music mogul to enter the New York City Marathon.

From there, Kutcher delves into the difference between passing on scripts versus passing on investments, a futuristic face recognition app that would scare you to death, and how he just now threw out all of his beloved trucker hats.

To hear from Ashton Kutcher while he fights his way through the Hot Ones challenge, press play above.

Chelsea Handler Reveals How She Got Into Comedy on ‘Hot Ones’
FoodsponsoredApril 4, 2019