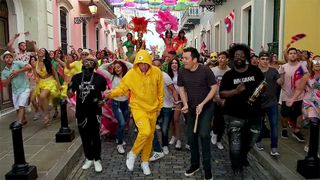 Last night’s episode of The Tonight Show Starring Jimmy Fallon took to the streets of Puerto Rico and had itself a glorious parade party lead by burgeoning superstar, Bad Bunny.

With Fallon, Questlove, and Black Thought in tow, Bad Bunny directed his parade down the streets of Old San Juan to the sounds of his incredibly catchy, Drake-featuring track, “MIA.” Watch above.

“MIA” is taken from Bad Bunny’s debut album, X 100PRE, which released towards the end of last year. See what we thought of the project in our album review.

In other news, DJ Khaled has been cast in the upcoming ‘Bad Boys’ sequel. Get the scoop on that here.