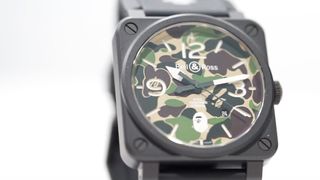 A Bathing Ape has taken to Instagram to announce a new collaboration with timepiece brand Bell & Ross. Posting a video of a camo-covered BAPE plane with Bell & Ross branding on the wing, the reveal was captioned #BAPEXXV, indicating the collab will be part of BAPE’s 25-year anniversary celebrations.

Additionally, a clip posted on YouTube by Malaysian men’s magazine KingsSleeve appears to reveal a first look at the watch: a watch face carrying BAPE’s signature camo print and Ape Head, a black strap, and industrial elements. Take a look for yourself in the video up top.

Of course, Bell & Ross isn’t the only brand BAPE has linked up with to celebrate its 25th birthday. Last month, we compiled the brand’s mammoth list of collaborators, which includes UGG, adidas, G-SHOCK, Formula One, and Barbie.

Do you want to cop the BAPE x Bell & Ross watch? Let us know in the comments below.

How Dragon Ball Rose From Niche to the Mainstream
LifesponsoredJanuary 15, 2020

How & Where to Buy Your First Real Watch
WatchessponsoredMarch 12, 2019