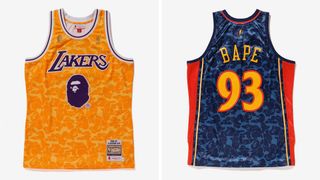 BAPE and Mitchell & Ness dropped their new NBA collection over the weekend in Los Angeles, featuring throwback jerseys, varsity jackets, T-shirts, and shorts. If you missed out on the initial release, you’ll have another shot when the goods come to all A BATHING APE locations except BAPE Harajuku on Saturday, October 20.

Next up, adidas is celebrating the 20th anniversary of iconic sports film, The Waterboy, starring Adam Sandler. The brand presents an SCLSU (South Central Louisiana State University) Mud Dogs-branded jacket, a hat, and water bottles, in addition to a Bobby Boucher replica jersey. The capsule arrives at a special event at Sneaker Politics in Baton Rouge, Louisiana on October 18, with availability coming to adidas.com October 19.

Elsewhere in the latest Ball Boyz episode, Ian and George take a look at some custom NFL cleats and break down Odell Beckham Jr.’s OFF-WHITE x Nike fit, as well as LeBron James’ recent tie-dye look. Press play above to check it out.

18 of the Best Sneakers to Add to Your Fall Rotation
SelectssponsoredOctober 4, 2019