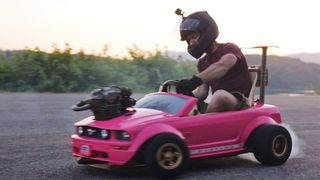 Remember the plastic whip your parents bought you when you were a kid? Those were the days, but we bet your ride didn’t come with the power that this particular Barbie vehicle is showcasing.

Grind Hard Plumbing Co, a YouTube channel that features insane contraptions and cars, has in turn put a real engine in a kiddie ride. Subsequently, this Power Wheels Barbie car has been outfitted with a Honda 240cc single cylinder air cooled four-stroke engine from a Honda CRF 230 dirt bike, also built with a performance cam and big bore kit.

The revamped Barbie Ford Mustang was ultimately transformed to race a shopping go-kart, as it took four days to construct. To see the final product in action, doing doughnuts and all, press play above.

In other design news, BMW has debuted their very own segway for factory workers.

15 Drops
The 15 Best Products to Drop This Week & Where to Buy Them
SelectssponsoredApril 14, 2019
Follow
Highsnobiety Design
What To Read Next
Load More
Search Results
Load More