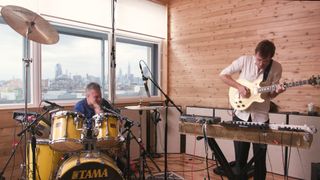 BATTLES is preparing to drop its fourth album Juice B Crypts this week, and the New York-based band jumped in a Brooklyn studio to bring its face-melting, progressive rock to the latest episode of Cue’d Up.

Drummer John Stanier and guitarist/keyboardist Ian Williams enlisted Sal Principato of Liquid Liquid as a guest vocalist to perform “Titanium 2 Step” off the upcoming album. They also performed “Fort Green Park,” another Juice B Crypts track, for the very first time. In between performances, they also take time to explain the process behind their latest work.

“So many happy accidents and beautiful situations arrived on our laps completely by accident that made this record sound totally different,” said Stanier.

“We write all the music first, and then we sit down and we decide which songs we think there are going to be vocals on. And half the time it’s the songs we definitely thought in the beginning were going to have vocals, it turns out they all of the sudden sound better as an instrumental and vice versa,” he added.

In continuing to speak on the record, Stanier noted, “There’s so much New York in this record…All of the collaborations, they happened so fast and it was so easy, but they fit so perfectly.”

Williams then went on to add, “This, it felt like we could just breathe and live, which actually probably made us happier in the end.”

Watch the new episode of Cue’d Up above, and look out for Juice B Crypts to release October 18.

A$AP Rocky Will Perform in Sweden for the First Time Since His Conviction
MusicsponsoredNovember 8, 2019

SXSW Is Being Sued for Canceling Its 2020 Festival Without Ticket Refunds
EventssponsoredApril 29, 2020

Facebook Is Being Sued For $9 Billion For Dodging Taxes
DesignsponsoredFebruary 20, 2020
Follow
Highsnobiety Music
What To Read Next
Load More
Search Results
Load More