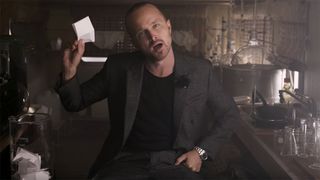 As we are just two days away from the much-anticipated release of El Camino: A Breaking Bad Movie, Netflix shares a new promo featuring cast members from Breaking Bad. In the clip we see series alum reacting to comments from the El Camino trailer.

Led by Aaron Paul (who played Jesse Pinkman), the likes of Dean Norris (Hank Schrader), Betsy Brandt (Marie Schrader), Anna Gunn (Skyler White), and RJ Mitte (Walter “Flynn” White Jr.), among other Breaking Bad cast members, read comments from fans surrounding the release of El Camino: A Breaking Bad Movie, before responding to whatever was said. Appropriately, each actor is seated in a replica of Walter White’s RV meth lab where he and Jesse infamously cooked up their drugs.

El Camino: A Breaking Bad Movie stars Aaron Paul and picks up as Jesse Pinkman escapes captivity, as shown in the final episode of Breaking Bad. Moving forward, Pinkman must confront his past in order to obtain some semblance of a normal future.

The First ‘El Camino’ Reactions Are in and It’s Beaten Expectations
MoviessponsoredOctober 12, 2019