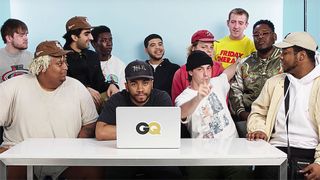 Rap collective BROCKHAMPTON go undercover in a new episode of GQ’s series “Actually Me.” The clip sees the group creating new user accounts on sites such as Twitter, Reddit, and YouTube, and diving into the depths of comment sections to answer real questions. Watch above.

Throughout the ten-minute long clip Kevin Abstract crowd sources answers from the rest of the group. Some of the question highlights include, “i love brockhampton! how does he do all those different voices??? really dope!!,” “how many one direction references does brockhampton make?” and “Paul Rudd in BROCKHAMPTON?”

In response to the Rudd question, it turns out Abstract has a pretty cute anecdote about the actor — apparently Rudd took the rapper aside to congratulate him on one of his solo albums. It also looks like Meryln needs to brush up on his Marvel knowledge as he said, “Paul Rudd said he said he wants us to join the Justice League,” before being corrected by Romil Hemnani. “Avengers, bro!”

On this episode of The Dropcast, we are joined by the B.STROY guys, Brick Owens and Duey Catorze, where we discuss the Nike SB x Supreme collabs, our latest New Balance 577 kicks and discuss why Skepta’s Nike Shox sneakers are some of the best footwear to release ever since humans discovered how feet work.