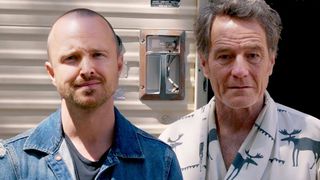 While the popular crime-drama TV series Breaking Bad lasted for only five seasons, the iconic show is celebrating its 10th anniversary this year.

Stars of the series, Bryan Cranston (Walter White, aka Heisenberg) and Aaron Paul (Jesse Pinkman), have teamed up with fundraising platform Omaze to support the Kind Campaign and the National Center for Missing and Exploited Children. To kick it off, they just debuted a comedy short film reflecting on the iconic show.

As seen in the video above, Paul enters the signature Breaking Bad RV to discover Cranston has been living there for years, unable to move on from the days he spent portraying Walter White. The humorous reunion between the Breaking Bad stars delves into a darkly-comic meditation on fame and legacy, as the two then share more details about the charity event, where fans who donate enter the chance to have a meal with the two actors in the actual Breaking Bad RV, and get to know the real Walter White and Jesse Pinkman.

Every donation supports The National Center for Missing and Exploited Children and Kind Campaign. For more information, click the bar below.

In related ‘Breaking Bad’ 10th anniversary news, check out this recasting of the show’s main characters.

‘Breaking Bad’ Movie Has Already Been Filmed, According to Bob Odenkirk
MoviessponsoredAugust 22, 2019