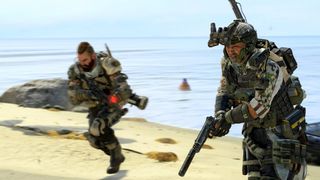 This week Activision presents us with multiple looks at the much-anticipated Call of Duty: Black Ops 4. The upcoming title will stray away from the traditional single-player campaign, instead opting for multiplayer modes.

Joining the multiplayer “zombies” mode is an all-new “blackout” installation, rivaling that of PUBG and Fortnite battle royale. Here, you’ll be able to utilize characters and locations from past Call of Duty games, all in the biggest Call of Duty map to date. This will also include land, air, and sea vehicles.

An Activision source has reported that the multiplayer focus will not extend beyond Black Ops 4, with future games returning to center around single-player action. The new title will, however, welcome narrative elements, largely in three different zombies experiences.

Below, you can get a look at Black Ops 4‘s multiplayer reveal and “zombies” mode, in addition to actual gameplay footage from the reveal event.

In other gaming news, Microsoft has officially announced the Xbox Adaptive Controller.

Donnie Yen Is Back in the New ‘IP Man 4’ Trailer
MoviessponsoredNovember 5, 2019
What To Read Next
Load More
Search Results
Load More