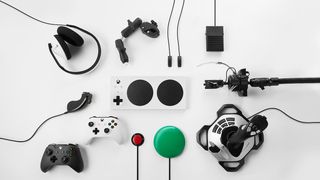 [UPDATE: May 17, 2018, 7:30 a.m. EST] After news of the new controller leaked recently, Microsoft has now confirmed the Xbox Adaptive Controller. Watch the video above and read our updated article below.

Microsoft has just unveiled a new Xbox controller built for accessibility, as the company announced recently.

As seen in the video image above, the controller, which is being called the Xbox Adaptive Controller, boasts a traditional rectangular profile, and is highlighted with two oversized A and B pads, along with a d-pad, as well as the usual Xbox button and navigation controls.

In addition, the A and B pads are suggested to be programmable, and equipped with a three-light LED indicator. It has two large programmable buttons and 19 jacks that can be connected to a range of joysticks buttons, and switches, allowing a wider range of people to play games on Xbox One or Windows 10 PCs.

The Xbox Adaptive Controller will retailer for $100 USD and is available exclusively through the Microsoft Store.

The controller will be shared fully at the E3 conference in a few weeks and will then launch later this year. Information about pre-order availability will follow soon, according to Microsoft.

Now, in case you missed it, this ‘Black Panther’ Xbox One X is a must-cop, but good luck.

Microsoft Explains Why the Xbox Series X Looks Like a Refrigerator
DesignsponsoredApril 2, 2020