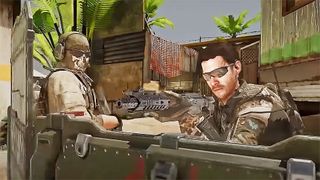 Call of Duty is coming to your smartphone, meaning soon you’ll be able to do battle while on your way to work. Coming courtesy of Activision and Tencent Games, the announcement trailer for the game, called simply Call of Duty: Mobile, dropped yesterday. Watch above.

The latest installment in the franchise is set to feature iconic maps such as Nuketown and Crash, and include weapons, killstreaks, and characters that previously appeared in the Black Ops and Modern Warfare series.

There’s no release date for Call of Duty: Mobile yet, but we do know that it’ll be a free-to-play FPS and come with the game’s all-important multiplayer mode.

You can currently register for a pre-launch beta version of the game via the Call of Duty: Mobile website and Google Play. Once out, it’ll also be available from Apple’s iOS App Store. More information to follow.

Watch the First Trailer for the ‘Call of Duty: Modern Warfare’ Reboot
LifestylesponsoredMay 30, 2019

Here Are All the Best Video Games Out in October
Video GamessponsoredOctober 1, 2019
What To Read Next
Load More
Search Results
Load More