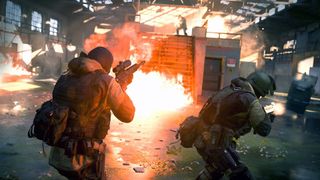 We got our first look at the Call of Duty: Modern Warfare reboot back in May. Now, the good people at Infinity Ward share with us a close look at the upcoming multiplayer mode, Gunfight.

The new mode serves as a fast-paced 2v2 experience featuring small maps and rotating weapons loadouts during each match. Sometimes players will get snipers and pistols, then in the next round, all shotguns. It’s an exciting change to the regular PVP formula COD is known for, and keeps players on their toes not knowing what weapons they’ll be equipped with.

To get fans excited, Infinity Ward has released a new 4K video on the PS4 Pro showing off the intense scenarios Gunfight has to offer. There’s no commentary or player chatter, just six minutes of a good ol’ fashioned tactical warfare. Watch above.