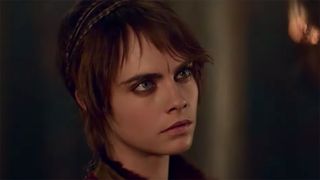 Following a pair of teasers, Amazon today shares the first full-length trailer for its new fantasy series, Carnival Row. Cara Delevingne and Orlando Bloom star in the program, which is set in a Victorian fantasy world overrun with mythological immigrant creatures.

In Carnival Row, the neo-Victorian city of Burgue has become flooded with mythical beings fleeing their homeland. This in turn causes tension to rise between the immigrant creatures and the human population, as the supernatural are forbidden to live, fly, and love in freedom.

Delevingne portrays a faerie refugee named Vignette Stonemoss in the show, opposite Bloom’s Rycroft Philostrate, a human detective tasked with investigating a series of murders. Despite strict rules against their romance, Vignette and Rycroft find themselves caught up in a dangerous love affair that could leave them both killed.

David Gyasi, Karla Crome, Indira Varma, and Tamzin Merchant also feature in Carnival Row, as the first season comes to Amazon Prime August 30. It’s also worthy of note that the show has already been green-lit for a second season.

Supreme’s Unreleased $8 Oreos are Reselling for Thousands on eBay
StylesponsoredFebruary 18, 2020
We Recommend