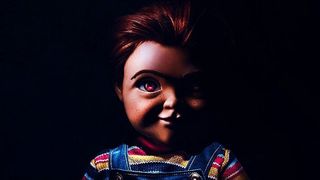 The latest trailer for the Child’s Play remake offers a first look at the latest incarnation of the sadistic Chucky doll, voiced by Mark Hamill (Star Wars). Thankfully (or not), new Chucky delivers all the “nope”-inducing vibes we’ve come to expect from a child’s toy inhabited by the soul of a killer. Watch above.

The film reboots the 1988 horror classic and will follow Aubrey Plaza’s Karen Barclay as she makes the wrong decision of gifting her son Andy (Gabriel Bateman, Lights Out) an evil doll for his birthday. Naturally, demonic torture games follow.

The Child’s Play remake is directed by Lars Klevberg (Polaroid) and sees Brian Tyree Henry (Spider-Man: Into the Spider-Verse) and Tim Matheson (Hart of Dixie) star alongside Plaza, Hamill, and Bateman. It’s set to land in theaters on June 21.