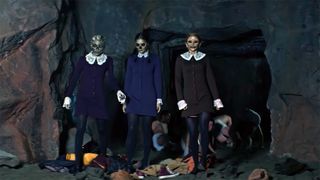 From the makers of Riverdale, Netflix today gives us our first look at its new supernatural series, Chilling Adventures of Sabrina.

You may immediately revert back to the famed ’90s sitcom starring Melissa Joan Hart, but this program promises to be darker and edgier, based on a spinoff from Archie Comics’ Archie Horror. Chilling Adventures of Sabrina tells the story of Sabrina Spellman (played by Kiernan Shipka), a half-witch half-mortal who is faced with the choice of darkness or light upon reaching her 16th birthday.

Alongside Shipka, the show stars Ross Lynch and Michelle Gomez, and is due to land on Netflix October 26.

Let us know if you plan on checking out the new Netflix original series.

In other news, Netflix’s ‘Insatiable’ has been renewed for a second season.

A$AP Rocky’s Description of Having Sex on Acid Is Hilarious
MusicsponsoredMay 1, 2020