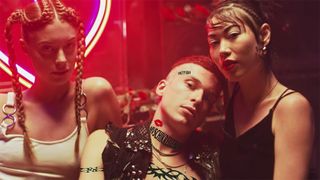 As the soft drink staple behind nightclub bars globally since clubbing really began, Coca-Cola’s network, knowledge, and influence is hard to rival. Now, the beverage brand is putting this to good use by dipping into Germany’s nightlife scene and shining a light on some of the best clubs and artists the country has to offer with its new events program, CARBONATE Coke Club Collective.

Launched in fall 2018, Coca-Cola has teamed leading clubs with respected promoters in a string of parties that will host some of the country’s most promising grassroots music collectives alongside established national and international artists. Unsurprisingly, a bar stocked full of refreshing 0.2L Coca-Cola-based beverages will keep guests watered.

Focusing on urban and electronic genres, the series of club nights is carefully curated to create unusual lineups, pairing established national and international artists that wouldn’t normally appear on the bill together. Those featured on this season’s listings include MadeinTYO, Yasiin Bey, LOCO DICE, DJ Stingray, NIMO, and Berghain legend Marcel Dettmann.

Big names aside, one of the main objectives of the CARBONATE Coke Club Collective is to support local scenes around the country by highlighting up-and-coming talent who are at the forefront of Germany’s underground music scene. Some of the notable collectives involved include Berlin’s trap pioneers Trap or Die, Munich’s rap collective 100BLACKDOLHINS, Noah Becker’s Baketown, Cologne-based rave organizers rheinrhythmik, and more.

The program kicked off on September 27 with an event held in collaboration with Boiler Room featuring DJ Stingray, Marcel Dettmann, and rising rapper Ace Tee (peep the photos above), and continues through the rest of the year and into 2019. See the full listings below.

Check out the video for the event program at the top of this page, then hit the button below to learn more about the CARBONATE Coke Club Collective.