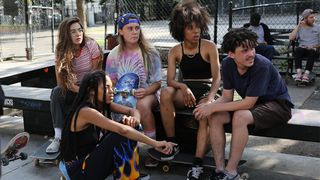 As an #old, every time I hear the whizzing sounds of skateboard wheels behind me I’m taken back to a time of Dickies, Etnies, puka shell necklaces and my own failed attempts at standing up on a board. However, with Crystal Moselle’s Skate Kitchen, skateboarding takes on the coming-of-age narrative and squarely puts women front and center of a culture that’s primarily associated with dudes.

Starring the Skate Kitchen, an all girl skating collective, the New York-based film follows Camille (a luminescent Rachelle Vinberg), a skateboarder who makes friends with a group of other girl skateboarders as they skate around the city, fight with skater dudes and fall deeply in friendship love with one another. It’s a film where not a ton happens, but it gets the mood of being a teenage girl—falling for both friends and terrible boys and being excellent at something that doesn’t typically fall into the “girl” category. Plus, if you aren’t wanting to cop all of Skate Kitchen’s incredible skater aesthetics, there might be something wrong with you.

We sat down with Moselle to chat about the film, casting Jaden Smith, and skater culture.

You collaborated with Italian women’s fashion label Miu Miu on a short film surrounding skater girls in NYC, was that collaboration the seed for Skate Kitchen? How did you connect with them?

It was. That was the first moment that I met them on the train, which is very similar to [how] I met the wolfpack on the street. I just instantly gravitated towards them and [they] had this incredible voice that spoke out to me and I asked them if they wanted to do a short film with Miu Miu and they were into it. They were really great because they were super hands-off. They’re like, ok, whatever you want.

When did you guys start talking about turning it into a feature?

After that was made, I got really great feedback and I felt really positive about it. So I was like, ok, let’s make a feature version of this. I originally wanted to do a documentary, because that was my comfort zone, but I was like, that’s not what I actually want to do with this. I want to collaborate with these girls and create something special.

How was collaborating with them while putting the story together?

It was just very natural. I’d hang out with them, I’d interview them, and write down little things that would happen and ideas. It was a lot of research and eventually I started to be able to put it into a script.

Since this was your first narrative feature, do you feel like the script was a traditional narrative or was it more stream of consciousness?

It’s definitely a traditional narrative, it’s just done in my style of films.

Working with them, since they’re not a group of primarily professional actors, did it feel different having to fit them into the narrative that you guys created together?

It actually felt more natural than making a documentary because I like to collaborate. When I work with documentary subjects, you have to step back and observe and I wanted to do more than observe. I wanted to be with them and be immersed in their world.

Were there coming-of-age movies that you looked to for inspiration when creating Skate Kitchen? I’m sure you’ve gotten the ‘Kids’ comparison a lot.

I was inspired by a movie called All These Sleepless Nights which is a Polish film, but I don’t know if it’s necessarily a coming-of-age film. It’s a hangout film. I got inspired by that movie because it was confusing as to what was reality and what wasn’t, and I loved that part. I liked that it was like you don’t know what’s happening but you’re just creating these completely authentic moments.

You’re giving visibility to women in a very masculine culture. What are you hoping people get from seeing that?

I hope that it gives hope to everybody, it doesn’t need to be just women. It can be men, it can be transgender, or just, hey, you can do things that you think you can’t do.

Jaden Smith plays the sweetest fuccboi ever, how was getting him onboard and working with him?

I mean, he was lovely. He was really one of the most lovely humans and he’s so much support in of this film and he’s just so happy to be around and be a part of it.

He’s so great in it, too. Was his character created through bits and pieces of talking to the girls about the types of men they’ve encountered during their time skating?

Yeah. I told him, if you’re going to be in this movie, you absolutely have to come and hang out with these kids in New York. I’m going to curate a group of boys for you. I knew I was gonna put them in the movie and I put them all together and Jaden went with them to Queens, and went skateboarding in the streets of New York and they all bonded and it really was inspiring to me because he just put in so much effort.

I think the style and aesthetics of the film are so New York. How involved were you in the costume design and/or styling, was it a lot of their own clothes?

Yes! It was some of their own clothes, but also the costume designer just got a bunch of clothes because everyone would give clothes to them, and then they kind of just put together outfits from that.

I really loved how you showed the microaggressions these women face in their day-to-day lives skateboarding. How important was it to show these instants of toxic masculinity?

It was like: do I have some guy molest her at night or do I have just what really happens at guy’s houses at times? Generally, I just wanted to tell the story how it happens in their lives and not try to over dramatize it.

What do you think the response is going to be like from dude skateboarding culture?

They’re hating on it, but once they see it, they stop hating on it. So the idea of it bothers them, they’re like Jaden Smith, all of these things about it, but if you see it, you see that it’s actually authentically their world. That’s also the whole fucking problem, that’s why we made the film in the first place is because guys have this real attitude of hate in the skateboard industry and that’s why not that many girls skateboard.

When I saw it I was like: Ok, dudes are gonna love this movie.

We showed it to a pretty young audience in London, and there was this young, hip, super cool, skateboarded dude, he was like, “wow, this is the first movie that actually made me want to be a girl.”

I’m just imagining a dude in head-to-toe Supreme saying that.

Yeah! They are in the New York City skateboarding scene, so I know New York skateboard kids are gonna love it. They get love from people in the skateboard industry that people respect. They also get hated on, but, fuck man, that’s life. It’s controversial what we’re doing, so we have to just go with it and that’s how you change things: you take things that are controversial and push and try to change the narrative.

Skate Kitchen is now showing in select theaters, you can purchase tickets here.

Lucien Clarke, Embodiment of Skate, Art & Culture, Is Cooking Something Up With Virgil Abloh
StylesponsoredApril 24, 2019

Annie Guglia Is the Skater with a Master’s Degree Competing at the 2020 Tokyo Olympics
SkateboardingsponsoredOctober 7, 2019