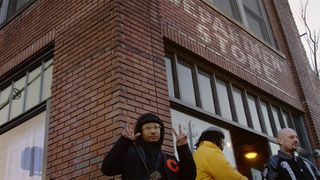 For the uninitiated, it was the birthplace and neighborhood that Dr. Martin Luther King Jr. grew up in, but in recent years the district has returned to the national stage serving as a proving ground of sorts for musical talent eager to make a name for themselves and link with likeminded creative individuals.

This cultural movement was keenly observed by another Atlanta legend in his own right—muralist and graffiti artist Dr. Dax whose work has graced American structures for over two decades.

Not only is he a firmly established commercial artist, Dax has been a faithful documentarian of the city’s unique subculture having witnessed the rise and establishment of one of Atlanta’s most important yet short-lived cultural hubs in recent memory: Erosol—Edgewood Avenue’s hottest nightlife spot at the time, or more affectionately known as “The Department Store” by regulars.

Drawing on his wealth of knowledge and local lore, New Balance tapped Dax and other area locals like Noah Zark, Fatman Key, DJ Genesis, and more, to tell the story of one of Atlanta’s most pivotal stomping grounds for young burgeoning talent.

While The Department Store may now be gone, the revival of the Old Fourth Ward continues. New Balance celebrates the independent legacy of this neighborhood with its storied 574 sneaker that also transcends both time and trends.

Dax leads us to the corner of Edgewood and Boulevard Avenue where The Department Store first opened its doors in May 2014. Its unassuming brick walls seem inconspicuous enough until you notice the faded “Department Store” signage along the building, clearly indicating how Erosol received its street moniker.

With lines out the door during its heyday, there were many reasons why artists like OG Maco, Quentin Miller, and Makonnen christened The Department Store as the next cultural hub for a new wave of artists coming of age in the digital world.

The Department Store partnered with Atlanta promoter J Wise and Maurice Garland who were savvy enough to figure out that by embracing technology it could spread its influence on a global scale through the increasingly digital music landscape. They held interactive “Playlist Parties” which embraced networking and leveraged social media during the height of the exploding Soundcloud Rap scene, allowing mixes to travel worldwide through the power of a hashtag.

The new Atlanta was young and hungry, and The Department Store is where these creatives cut their teeth. Check out our exclusive documentary with New Balance above to get a deeper look inside the short-lived venue that changed Atlanta’s hip-hop scene forever.

New Balance Is Producing Face Mask Prototypes in Its US Factory
SneakerssponsoredMarch 28, 2020